Overwatch – How to win in a toxic game

Blizzard boasted that since the introduction of „endorsement“, the number of negative behavior games has dropped by 40%. Honestly, I wonder how the number came. I think it’s bullshit, and they play another Overwatch in Blizzard than all of us. If I’m wrong and you just feel love in playing from your teammates, then congratulations. You don’t need to read on. But if you feel that players are sometimes sour, unpleasant or attacking your mom, the next lines will come in handy.

What Is Toxic Behavior?

Toxic behaviors mean that by expressing your teammates, you evoke negative emotions. Perhaps we all know textual or verbal personal attacks: „You are wrong and I will tell you that you are bad because I am the best.“ In short, somebody will throw shit on you because they think it will help your spirit. Hardly. It does not matter whether the criticism is justified or not, the victim gets offended, begins to defend himself and attacks back. The result is that one third of the team is not playing the game. But this game is for six people and they are needed to win.

Toxic is at all levels

Did you hope that when you go up, personal attacks disappear? Forget it. Toxic players are everywhere – in bronze, silver, gold, platinum and in the master. In short, be prepared for the negative emotions of other players because this is a head problem, it’s not about skill.

Why are players toxic

This is simple – EGO. Everyone wants to win. I also want to win. And don’t try to do something that will endanger my goal, like:

It all starts at the choice of character. Like when someone takes Torbjorn to attack. Or when there are two Sharpshooteers in the team – Widowmaker and Ana and someone take the Hansa to them. Who’s gonna get to the point? Another typical foul is to get Bastion when you don’t have a shield. These are just examples.

A common mistake is when a player cannot repick to another hero. For example, in a game where the opponent has three tanks and Widowmaker is against them. What can Widow do against three tanks? But it also happens when player is „stuck“ to his selected characters. This is nothing wrong, but the problem arises when someone repeatedly counters him and he does not and not repick someone else, instead trying to kill his nemesis.

Misunderstanding the purpose of the hero

This is a thing that really can upset you. For example, if you have Reinhart in your team, you need to push gradually, and he with full shield begin to charge, revealing his entire team. Or support – like Ana or Moira, who primarily attack instead of defending. After the game they boast of having gold for the most kills. GRRR!

You will die often in Overwatch, that’s normal. But there is nothing worse than having one player go after another alone agains enemy like in some Tower defense game. Re-group!

The same problem is when a player cannot get back from the lost fight. The opponent beats out most of your team, but the last survivor of your teammates is convinced that he will kill whole other team by himself. Of course, there are moments when you have to stay on the point, because you would lose that round. But people do this nonsense when the game is just in the beginning!

Your teammate is screaming: “Heal me, heal me, heal me” while standing a few steps from the medkit. That is the moment when you want to say: „Fuck you and get the medkit“ or “Damn, if you need a babysitting from a healer, you should have taken a character who can heal himself.”.

This can make you upset even if you have more „zen“ than Zenyata. As long as you win, it just botheres you. But when you start losing, you want to tell others something „special“, which is the way to hell. 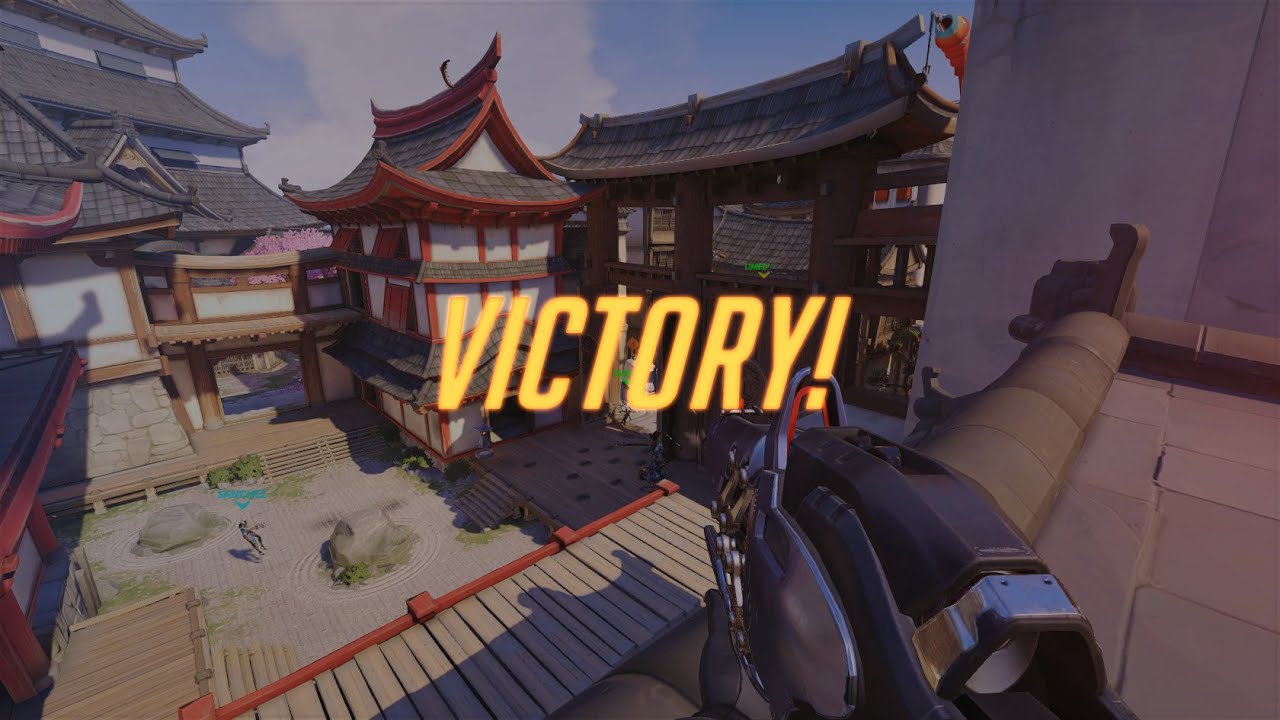 How to win in a toxic game

Imagine that your teammate is bad. Like really really bad. It may like he has mouse/joypad stuck in his ass. Be better player and don’t tell him. When you say something to him. What do you think? Will he be willing to listen to you and analyze your mistakes? No way. You must never be in a position to school him.

When he does something good, praise him. Honestly praise him, even if you think the opposite. Maybe he’s just got a bad day or a bad game. If you support him, maybe his game will improve.

Make it personal – in a good way. Ask him to cover you, because you can’t handle it. And it may not be true at all. The important thing is that his game will make more sense to you and to the whole team.

Try to evaluate the situation and ask for a repick – ideally for another simpler hero. For example: „Trace crushes us, please repick Junkrata?“

3) Be a problem solver

When you play alone without your own team, it’s hard to cooperate. People walk in different ways, prioritize different goals and ults when they want. That can be frustrating. Turn on your microphone and lead your team. If you are not native English speaker (like me), dont be afraid. You don’t need long phrases, you just need to learn the following:

Even if you have a team full of accurate shooters, they can’t do anything if your team doesn’t have a quality healer or tank. In that situation maybe someone decides to save the the team and pick Briggite. But she has a weapon for close combat only. So the player goes to the front line and turns her shield. In that moment he has no idea what’s going on behind him and doesn’t really heal anyone. Similar situation is when your team needs tank and someone pick Roadhog and play him as solo play.

Such a player then says: „I’ve taken a tank / healer, so what are you crying about.“ Unfortunately he does not understand that hero classes are for orientation only and what makes a hero is a play style.

In this case, you have no choice but to fill the missing role – typically using Mercy, Lucia, Orisa or Reinhart. This approach means two things:

1) Often you will sacrifice your team win, it’s great.

2) You will soon get stop having fun, because you are will not play for yourself but for others.

Personally I’m trying to play this way: I’m quickly picking my prefered hero and waiting for the others to choose. If the team is balanced I’ll keep my character. When I see that we have a big gap, I will repick.

Even if there is someone bad in the team, you can still win. A lot of times I have experienced that we, at least in my opinion, have played really miserable. But it eventually was enough, because the opponent team made bigger mistakes than we did. And therefore play the best you can and what the team needs. Never give it up and focus on the result.

There are players who are able to criticize the whole game. Just block the communication with them. Blocking communication is not the best way, but these players will not say anything constrictive anyway.

The second thing is text chat. There are a lot (or maybe most) of people in the game who can only be rude in a text chat, but they will not say anything in voice chat. Instead of fighting in the game they fight at the keyboard. If you encounter a graphomaniac, turn off text chat and only communicate through a microphone.

How to prevent toxic Overwatch game

1) Create your own team

Find a bunch of people to play with regularly. After all, friends are more willing to listen and cooperate than strangers. Even if you are not the whole team, you will be able to kick off the non-cooperating player and hope that the next one will be fine.

In a competitive mode, all players want to advance to a higher competition and therefore they need to win each game. When you turn on quick play, most of the tension disappears and you can enjoy the game.

Even if the team isn’t doing well, you’re still here. Do not focus on whether you won or lost, focus on you played well or bad. Try to think of yourself and give the best performance. If you do it for a long time, you will see that your rating will grow gradually. And what to concentrate on? Here are a few tips:

Everybody has his own limits. Find out where your borders are. Some players say they have to stop playing after 2-3 losses, „I’m a Mushroom Cloud Laying Mother Fucker“ (Pulp fiction™) after losing one game.

An important element of your sanity is an enemy team. If a live opponent focuses on you and kills you three times in a row, it’s personal. Humiliation is equally personal, if Roadhog, Lucio or Pharah push you off of the map. When you play against the computer, this personal injury does not appear. It’s strange, but it is. So if you want to play without stress for a while, play against the AI in training mode or custom game. Ideally, try to play characters you don’t play at all. You will see that even this variant will bring you something new. The perfect choice, but only a few days a year, are various events such as Storm Rising, Uprising, etc. After dozens of hours I can say that I have never saw a sign of something hostile.

Even if you try hard, frustration will eventually come to you. You won’t want to constantly control your temper or sacrifice for your team. You just turn it on and say, „Why do I actually play it when I know how it ends?“ At this point it is good to uninstall the game. At least a month or longer. Play something different – you will come up with different thoughts and over time the taste and patience will return to play Overwatch again. Personally, I have a fourth break in the years and I have to say that – it works. What is sad is that over time the pauses are longer and the game segments are shorter. But I can still enjoy Overwatch enough.

Overwatch is not the only toxic game. Unfortunately, this is a fundamental problem for all competitive team games. But Blizzard could definitely do a lot more than punish players who spoil the game. But Blizzard NEVER does it. The responsibility is officially transferred to the players.

OW’s endorsement is something, I dare say, that doesn’t work. I do not care if I have endorsement at level 2 or 4 and I expect a lot of other players to do likewise. Reducing SR ratings also does not solve much – the problematic player will continue to spoil the game, only at a different level. Perhaps exclusion for a particular time period would help, and there is also the risk that a troll who does not manage his emotions will soon continue where he left off. In short, it doesn’t have a simple solution, so it’s up to us – players. A few options to do, we said, so let’s try some … But beware, when you will provoke me, you’ll see: o)

CO-OP #20: novinky v Satisfactory a No Man’s Sky Beyond